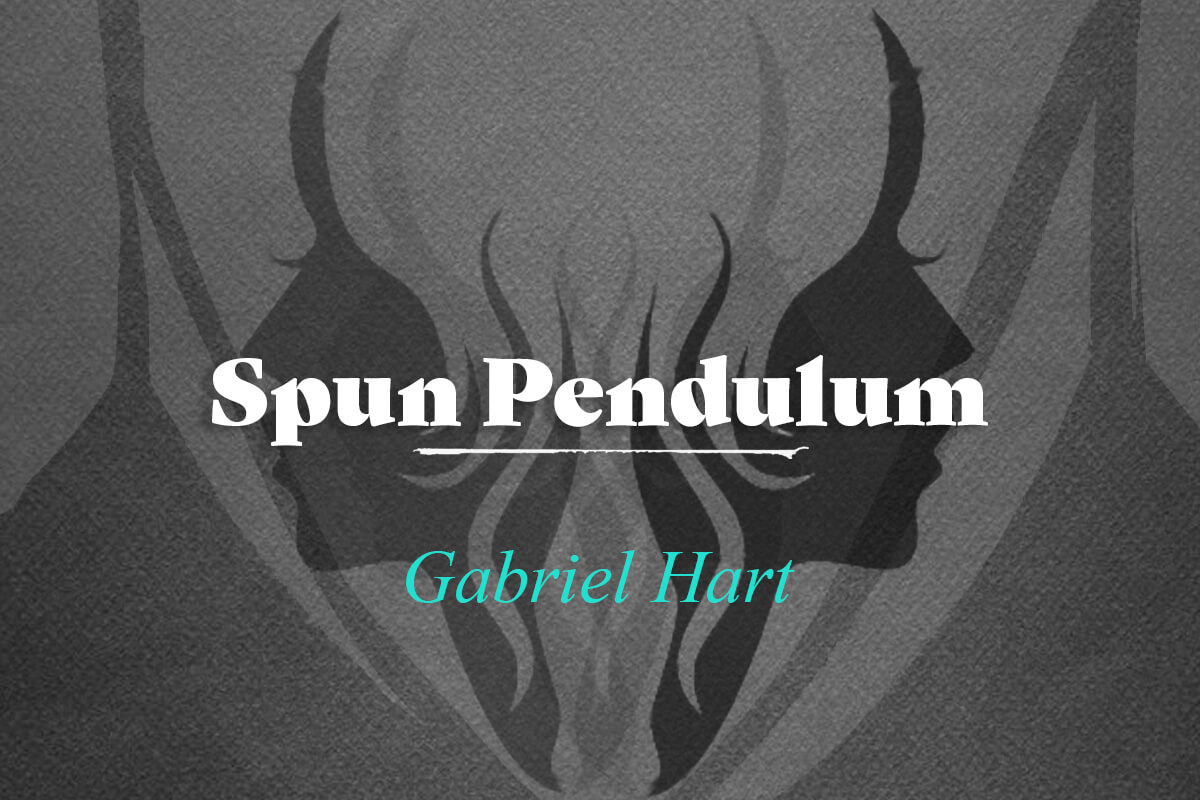 She stuck the note into her cleavage so they wouldn’t search the apartment any more than they needed to. It would all be right there. Blatant. Hopeless to argue about. Impossible to look away from. She wanted to make a statement, not a mystery.

Since I wasn’t born here, I’ve had to reapply for citizenship every couple years – some updated terrorist-paranoia shit from 9/11. And guess what? They fucking denied me this time, all because of that time I beat my boyfriend with my high heel. He fucking deserved it. I didn’t deserve this.

And now that this fucking shithead is in office, they told me I’m going to be deported back to Korea, and if I didn’t turn myself in within three days, they’d come to my apartment. Well, this is fucking day three. Come find me, bitches!

Maybe the Land of Milk and Honey is this way, right here.

They identified themselves as Officer Ramos and Deputy Johnson, speaking from the hallway through her locked door. Sympathetic, though firm.

“Are you armed or any sort of any danger to yourself, or anyone else?”

Then, a tiny yap of what sounded like a small dog.

Ramos gave Johnson the look as he grabbed the battering ram, as Johnson got behind it for extra weight. Four heartfelt heaves to splintered the door enough to kick the panel in. Through the hole they could see a little Yorkie going apeshit, unaware of its own diminutive form. Ramos reached through to unlock the knob, clinching eyes with Johnson once more as he pushed it wide open.

While it was still early evening, they were just too late. The limp body of a tiny but gorgeous Korean woman hung from the ceiling fan, a dog collar choking her neck in permanence. The leash attached was coiled uptight like twisted wrought-iron. As the leash reached maximum tautness, she began to slowly rotate the other direction, implying she still possessed a post-mortem form of perpetual motion. A barstool stood two feet away from her dangling high-heels, still rocking in that slight, slow pendulum, indicating the freshness of her death. Both stilettos pointed to where she should have remained standing in a better world. Her body subtly spun like a ballerina music box, or a cake in a display window, allowing a witness to be privy to every detail whether they wanted to or not.

They wanted to. While Johnson trembled with glazed chickenshit apprehension, Ramos led them in. Johnson trailed cautiously behind him. He knew it was against protocol but couldn’t help crouching down to try petting the puppy back to tranquillity.

Ramos drew his gun, aiming at everything in calculated scans, though no one else was accompanying the swinger. They both froze once they eyes adjusted to the dim of the apartment, bringing her outfit into focus: a black leotard over white tights into a couple of very expensive heels – her take on a Playboy Bunny get-up, minus the ears.

Johnson stood there staring paralytic. His mouth agape, never had a man with a gun firmly in his hand been so disarmed. He took a knee, now clearly genuflecting rather than studying, with only the urge to return her silence with his own. He started to sob uncontrollably.

“The fuck are you doing, Johnson?!? You wanna be of real help to this shitshow and do your fucking job by any chance?” Ramos surveyed half the room before he saw his young partner, enchanted and unprofessional.

“Sorry, man. This is just my first time seeing something like this. I didn’t realize someone could do themselves in like this and look so… I hate to fucking say it, but at peace?” Johnson’s voice quivered then broke into tears again, immediately emasculating himself.

“Why are you fucking crying?!?” Ramos was mystified as well, but only at his partner’s pathetic reaction. It made him squirm in shame. He knew Johnson was a little unstable, but he was his brother-in-law now, so this was also becoming an emotional conflict of interest.

He thought of his sister, Johnson’s new wife, and did his best to cool his jets. Begrudgingly, he walked over to indulge his partner’s divergent observations, before shaking his head.

“Listen, I know it’s a little weird when they’re dead and still have their eyes open, but it’s nothing to psychoanalyze. Some fools just have a braver gaze into the abyss, is all.”

Johnson waited for his partner to resume his search of the room so he could stubbornly return to his vantage. As she tauntingly rotated, he noticed something white ensconced in her. He took a couple of steps closer.

“Call a detective…” Johnson slurred out, a ventriloquist caught under his own tired gag.

It wasn’t at all how it looked. Ramos assumed Kim was a prostitute with her scant, sensational get-up. But after the note was read, analyzed, and some of her close friends and family were contacted, turns out that was just how she dressed while she was at home. A little eccentric, as her evening wear looked hand-picked by Hefner himself.

“She just liked to feel pretty,” is what her best friend had revealed through pleading sobs as she pet her new adopted Yorkie. After Kim’s inexplicable absence from work, her phone going right to voicemail, and leaving plenty of her own footprints on Kim’s door, she was the one who called the cops.

Kim’s note unravelled a more vast, sad state of affairs, one that indicted the country’s current xenophobic administration as the last straw in her perfect storm of abandonment. Her permanent exit an incendiary battle cry of both the personal and political.

Monday morning cruelly found Johnson at his desk looking himself like a stinking corpse after a long weekend. He showed up an hour late, leaving no choice but to wait for a scolding from Ramos, adding to the crawling skin paranoia of his hangover. He stared out the window onto the passing traffic, searching for reasons not to run right into it.

“What the fuck happened to you, Johnson?!? We were trying to call you all fucking weekend, and now you’re an hour late here? My sister is worried sick. Have you even called her yet?!?

Johnson responded by covering his face with his hands, then collapsing into his forearms on his desk. He figured the longer he remained silent, the longer it would take for Ramos to find out he was still drunk.

Ramos grimaced, lips trembling. He leered closer to Johnson as he lowered his head to sniff for the big clue.

“YOU’RE FUCKING DRUNK?!? You fucking piece of shit! Eight months of sobriety down the fucking drain? What is my sister going to say? She took a chance marrying you, and I took a big chance on you joining the force even though you possessed every fucking red flag in the book…” Ramos reeled himself in with his volume, though not his spite.

“You had a fucking record and I made it magically disappear for you, you son of a bitch.” Ramos whispered point-blank into his ear. “Am I a fucking idiot?”

Johnson looked up at Ramos, focusing on the veins in his forehead so he wouldn’t have to look him in the eyes.

Ramos wound up and slapped him across his grovel-face, to remind him who used to be in charge of who.

“Give me your badge, your gun, and then go see my fucking sister, you piece of shit.”

Johnson did not go to see his worried sick wife. Instead, he broke his half-drunk haze with a sneer as he got into his car, turning the other way out of the station and rolled steady towards Los Angeles Street. “What sad naïve symbolism,” he thought – the histrionics of giving up his gun to Ramos when he had the one under his bed at home, and then another one in his glove compartment. He flipped it open to make sure. There it is, right there.

His adrenaline was nearly sobering, tightening his stomach when he realized this was really going to happen, that he was actually going to do it. He made a right into the Los Angeles Dept of Immigration, where people were just doing their job. That, he was convinced, was the fucking problem.

He exited his vehicle, approaching the front of the building with errant strides before swinging open the glass door. Once inside, he paused in panic, a temporary thought that this was crazy left his mind as fast as it came. He swayed like a buoy, behind a Medusa-head of lines of people beaten down by fate, now awaiting the fist of geographical circumstance and fickle illusions of law. He prayed to God for a sign.

His DTs careened with his pining, his mourning, his suffocated, writhing projections. He saw his mistress Kim, her apparition hanging above the balding man at the 2nd window. She slowly spun like her last dance in the dark apartment where he left her. Target determined, he raised his gun and fired. Blood sprayed the shattered partition. The room choke-screamed in muffled pandemonium, as Johnson put the gun to his head, determined to finally find the peace that his honey achieved, that way, right there.

Gabriel lives in Morongo Valley in California’s High Desert. His debut twin novel of surrealist-noir Virgins In Reverse / The Intrusion (Traveling Shoes Press) was released in 2019, with a foreword by Avant-rockabilly provocateur Tav Falco. His upcoming desert-themed speculative fiction novel Lies of Heaven will be published by Space Cowboy in late 2020. Other works have appeared in Pulp Modern, Black Hare Press (Australia), Crime Poetry Weekly, EconoClash Review, and Shotgun Honey. He is a regular contributor to Space Cowboy’s Simultaneous Times podcast, as well as L.A. Record, a Los Angeles underground music publication. Hart also taught the writing workshop for Mil-Tree, a non-profit reach out program for Vets and Active Duty Military to heal the wounds of war.