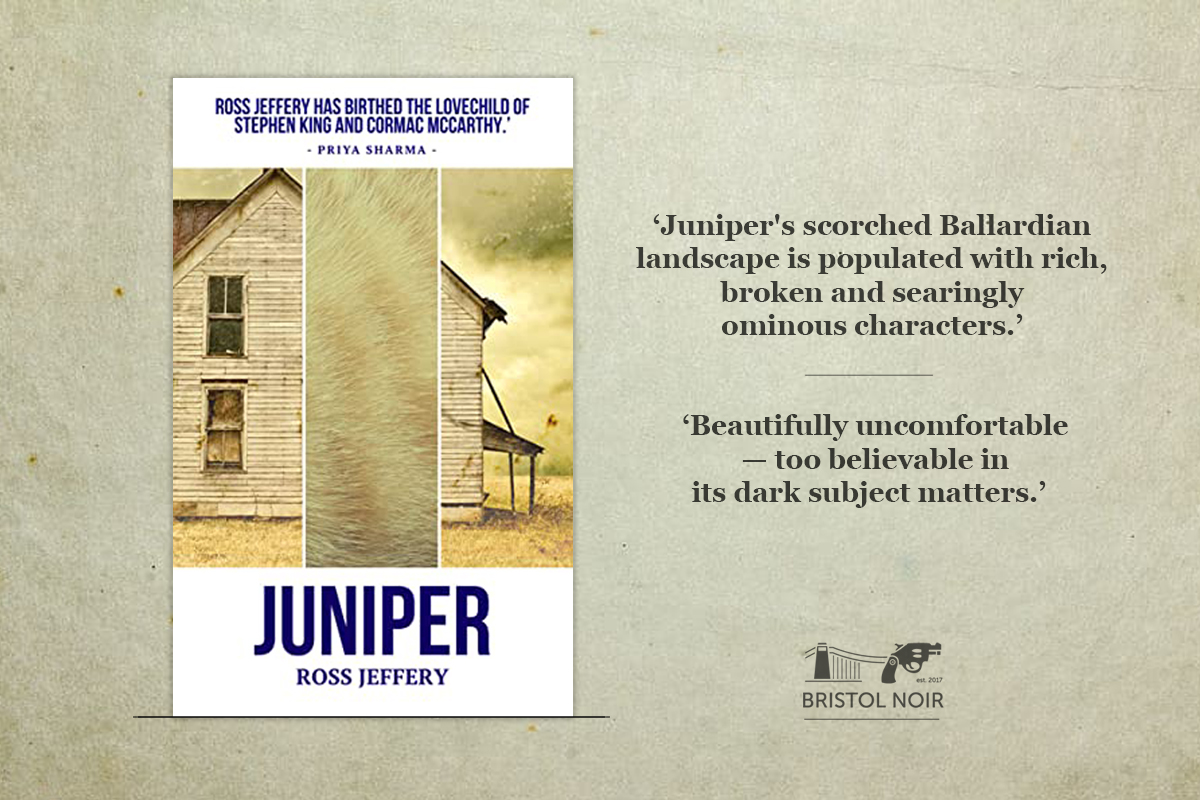 Juniper is out now with The Writing Collective (TWC), who in their own words are: ‘a band of writers who have a passion for writing and getting fabulous works of fiction into the hands of readers.’ It’s well packaged and type-set, which beautifully compliments the content. A testimonial shouts out name dropping Cormac Mcarthy and Stephen King, and so sets a dauntingly high bar. As does the author’s own bio’ and experience: including being Exec’ Director at the brilliant STORGY Magazine.

Anticipation and expectations were high before reading Juniper.

I became aware of Ross Jeffrey through STORGY: an inspired showcase for upcoming and established writers. Very quickly my expectations of Juniper, however unfairly highly set by all this, were exceded — of course, I should have known…

‘She’d force the stick through the mouth and push hard until it poked out the other side. Janet dealt with the brutality of it all by imagining she were darning a garment, one of Klien’s old socks, although sliding the wooden needle through a completely different fabric.’ – JUNIPER, Ross Jeffery

Juniper’s beautiful dark Ballardian landscape, also reminiscent of Terry Gilliam’s ‘Tideland’, is mirrored in its broken, fragile, and searingly ominous population. Although a light novella in size, it’s so very rich and dark in the subject matter.

Jeffery takes you straight into the arid heat of Juniper and behind the closed doors of this eerie town — where there’s evil and torment. Like the heat outside it resides in the characters as they bubble away, floored, and cracking further open right from the start. This landscape and the evilness is all too real. It could have been considered a surreal future SciFi bleakness — not anymore. Global warming is on everyone’s conscience. And it was always very real. And the evil exposed in the character play — again all too real — as people have grown open to talking about domestic abuse with the physical and psychological consequences.

Her father once told her: ‘You’ve got to be kind to everyone you meet Betty, because everyone is fighting a battle you can’t see ‘ – JUNIPER, Ross Jeffery

The tension is well crafted, building more and more…and I hesitated to turn the pages. The character and landscape fragilities are so very close to real life. The themes are all so near and familiar it makes the book matters up close relateable. What’s possibly most uncomfortable is this prophetic eyeglass it shares with us. Maybe a few months ago this would have more surreal — as it stands now, it’s near future-ness is all too uncomfortably near and it’s getting closer.

The gruesome ends the townsfolk go to feed themselves from their homegrown ‘stock’ is gloriously horrifying. Both to read as a cat-lover (sorry Fred — my feline editor) and as a vegetarian. The ‘ignorance is bliss’ of the townsfolk in harsh, bleak, and horrid times, again, offers a possible glimpse at ourselves and how bad it gets before instilled moralities shift. Once considered abhorrent behavior becoming commonplace; almost celebrated. These unsettling aspects are made more poignant in the fact it doesn’t appear that bad (or different from what we’re used to) before this moral code flux. And…that this is totally believable.

A different author might have drawn out a 100k epic, but this is sharp. It’s concentrated and focussed as it congers up lingering imagery that lasts way after reading. Yes, it’s dark. It’s a deep darkness though. A sophisticated kind that doesn’t too obviously say: rural, post-apocalyptic, or visceral horror. And this is what makes it special. Yes, it’s King-esque and has some horror tropes to it. But, beyond that and most importantly it’s something altogether different, new, and exciting to discover.

I didn’t want Juniper to end. What a relief to see the follow-up Tome noted for release later this year in the last pages.

In making Juniper, a new Ross Jeffery book has become something to eagerly await… I can’t wait for Tome.

Ross Jeffery is the author of Juniper and is a Bristol based writer and Executive Director of Books for STORGY Magazine. Ross has been published in print with STORGY Books, Ellipsis Zine 6, The Bath Flash Fiction Festival 2019, Project 13 Dark and Shlock Magazine. His work has also appeared in various online journals such as STORGY Magazine, About Magazine TX, Elephants Never, 101 Fiction, Ellipsis Zine, Soft Cartel and Idle Ink. Ross lives in Bristol with his wife (Anna) and two children (Eva and Sophie). You can follow him on Twitter here @Ross1982

ALSO OUT NOW WITH ‘THE WRITING COLLECTIVE’: