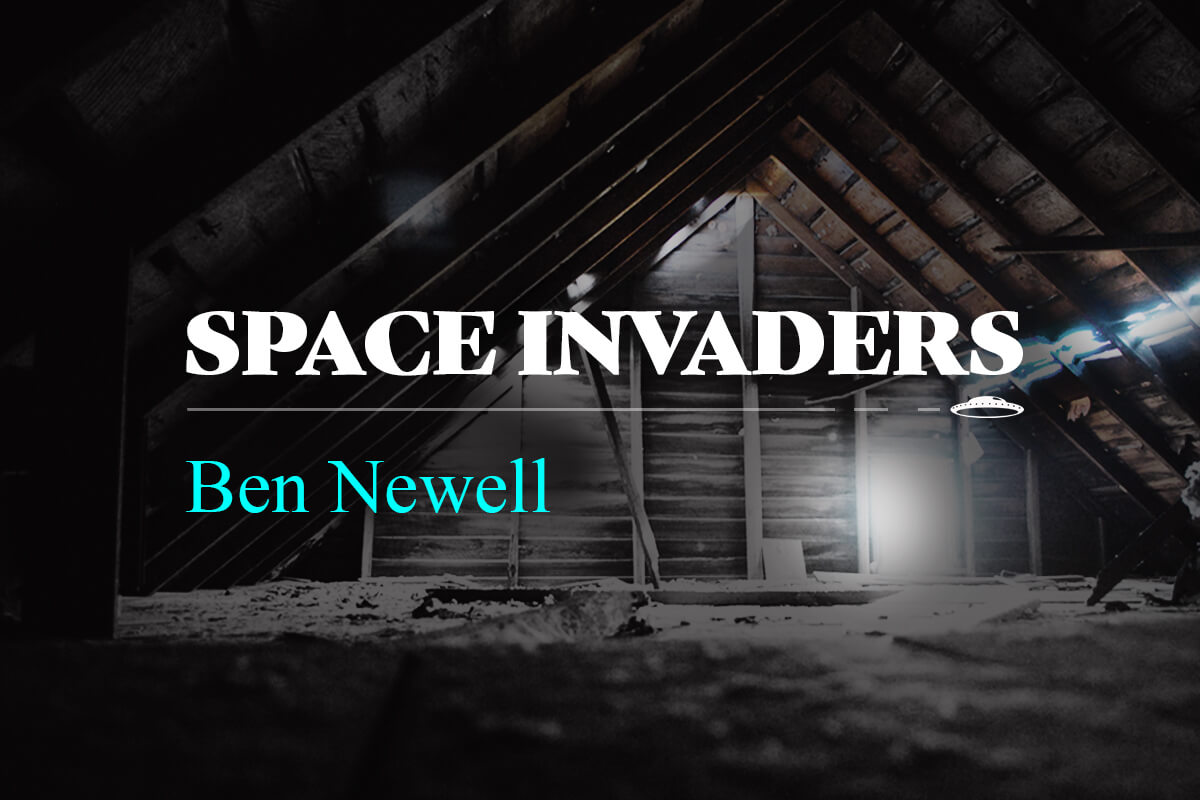 Jeremy became aware of the aliens at seven-thirty in the morning.

That’s when he heard them walking on the roof of his apartment; their footsteps woke him from a less than sound sleep.  Of course it was entirely possible that their spacecraft had landed prior to this, touching down stealthily under the cover of darkness. That would make sense. The aliens would want to arrive while the earthlings slept.

Lying in bed, heart pounding crazily, Jeremy visualized the disc-shaped ship; it must’ve looked strange up there on the roof of his little ranch-style rental. Surely his neighbors had called the police.  It was only a matter of time before the authorities showed up and took care of business, blasting the invaders to smithereens. Jeremy would’ve called himself, but his phone had been disconnected several days ago.

Until help arrived, he would just have to tough it out.

The digital clock on his nightstand read 8:07.

Now the aliens were pounding on the roof. It sounded like a stampede up there, relentless and unceasing. They were banging away with some kind of alien battering ram, doing their damndest to gain entry.

The aliens wanted to abduct Jeremy. They planned to whisk him away in their spacecraft and take him back to their home planet. The alien doctor wouldn’t be anything like Dr. Patel.  Jeremy’s doctor was caring and kind; he just liked to talk. No needles, no knives, no painfully invasive probes.  Just talk. The alien doctor wouldn’t say a word; it would cut Jeremy open and study his insides; it might not even use anesthetic.

Jeremy started to sweat. The ceiling fan whirred, yet failed to keep him cool.  Another hot day.  Sun slanted through his dust-caked mini-blinds. He wondered if the heat would affect the aliens, make them sluggish and weak.

Doubtful.  The aliens weren’t stupid. They had done their homework, gathered vital intelligence, choosing summer for a reason. They thrived on the humid climate. The blazing sun made them stronger. That’s why the pounding was getting even louder, the brief interval between strikes shorter.

Why was it taking the police so damned long?

The roof, Jeremy reasoned, couldn’t withstand the onslaught forever. It was an old roof.  The aliens had to be making some serious headway. Judging from the incredible noise, they possessed awesome strength and stamina.

It would crack like an egg, plaster drifting a split-second before they punched their way through, punched and kicked, and pounced on him in his bed.

Jeremy couldn’t wait any longer. Something had happened to the police. Perhaps the aliens had attacked the local precinct, slaughtering the hapless officers and setting the building aflame.  Nobody was going to save him, nobody but himself.

He rushed to the bedroom closet, knocking shirts from wire hangers as he retrieved the Marlin 12 gauge shotgun. There was a box of shells on the floor beside an old pair of dollar store tennis shoes stained green from freshly mown grass. His landlady, Ms. Martha, shaved fifteen dollars from the rent each month in exchange for his labor. It was a no-brainer: her mower, her gas, small yard.

He made his way to the hall and pulled on the cord to the attic door. The rickety steps unfolded easily enough. He proceeded to climb. The noise was far worse in the stifling attic, a nerve-shearing cacophony that made him grimace as if in extreme pain.

You sorry bastards won’t get me!  I’ll die first!

He shucked the pump, pressed the stock to his bony shoulder, and fired the first of many shells into the attic ceiling.

After the police had kicked down the door, after the shooter in the attic had killed one and seriously injured two, after he had been subdued and taken away in handcuffs, an ambitious young detective scouring a filthy kitchen littered with empty beer cans and grimy dishes noticed a single sheet of typing paper, neatly folded and stapled, atop a stack of unopened mail.

Grasping for some sort of explanation, he pulled it open and read:

I have spoken with the contractors and the projected start time on Friday will be at 7:30 am.  Please park your car around back to make room for the truck. Thank you for your cooperation as I strive to complete the roof replacement on schedule.

Ben Newell is a poet, reviewer, and fiction writer living in the deepest South of Mississippi.  He dropped out of the Bennington Writing Seminars during his first semester, eventually resuming his studies at Spalding University where he earned an MFA.  He works at a public library.

The Bench Warmers on Shotgun Honey