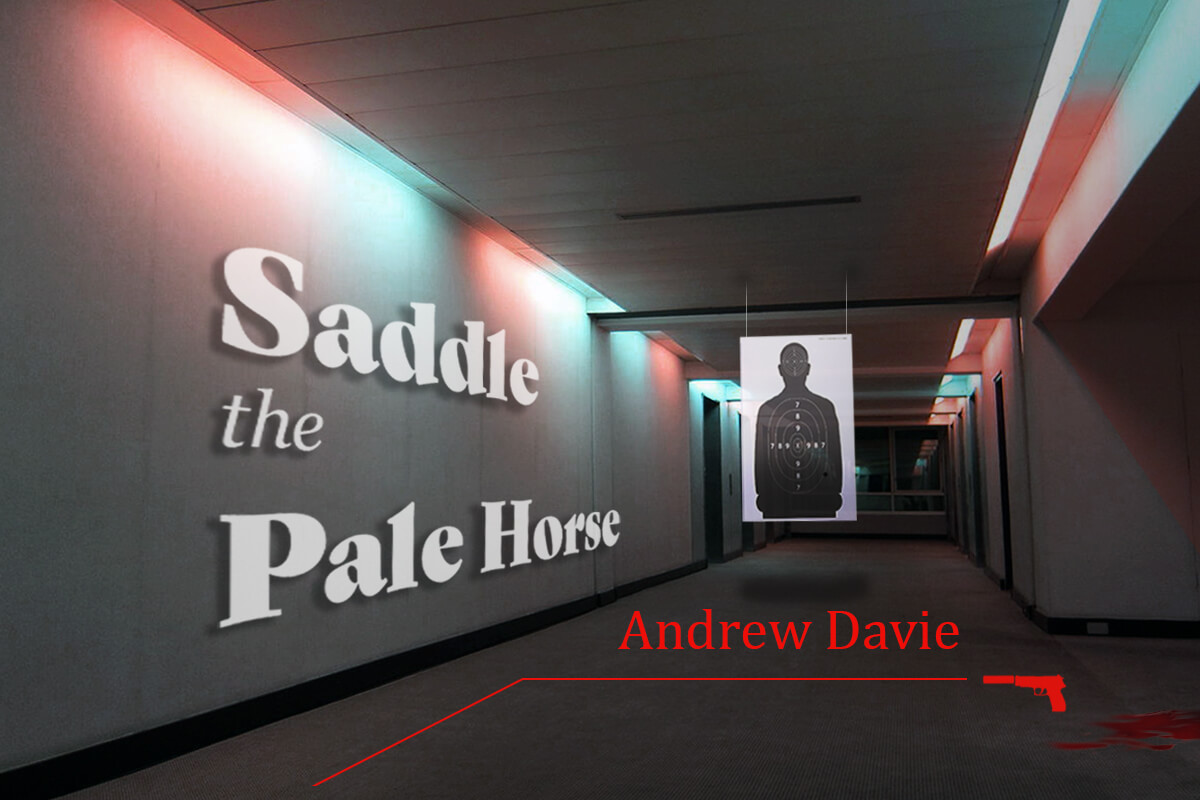 Prequel to Behold the Pale Horse

Fred Picciotto took a sip of his peppermint tea. It was going to be almost two years at the end of the week, but he wasn’t like some of the others who proudly displayed their days on the wagon like some sort of badge. He squeezed the remnants from the teabag and placed it on a paper towel on the table. He took another sip. People who masked the flavour with honey, sugar, or milk baffled him.

“How the fuck can you drink that stuff?”

Showalter “Walt” Bagby had his brow furrowed, and his nose shrivelled up. He had a jawline most actors would kill for. In a movie depicting his life, he’d play himself since no one would be able to properly capture the nuances. Picciotto didn’t respond.

“Whatever,” Bagby said finally and took a bite of his burger.

The bar was empty, but they sat in the back booth out of habit. Large red plastic upholstered backs pressed both of them forward against the Formica tables. It bordered on uncomfortable, but not enough to dissuade them from returning since it was so close to the base.

“This don’t bother you though, right?”

Bagby held up his beer and finished his half a sandwich; morsels of which were getting lodged in his van dyke.

“It’s fine,” Picciotto said and carved into his pie.

Bagby ran a hand over his mouth and took a healthy pull of his beer. He knocked himself on his chest with his fist a few times, like he was jarring something loose, winced, and sat back. His arms folded over the booth’s backrest like stop motion flower petals opening.

It would be impossible to guess from his demeanour, but Bagby was one of the best specialists in the business. If you could tolerate his behaviour, he would deliver time and time again. Bagby grabbed the plastic ketchup bottle, dowsed the newly arrived plate of fries, and shoved a bunch into his mouth. Every month, Picciotto would have to make a recommendation for the candidates to refer to various programs, and he liked to get some of the other NCO’s perspectives. This bar had become their defacto hangout where business often mixed with pleasure.

“What do you think of Cleary?” Picciotto said.

Bagby calmly recited Clearly’s last three performance report scores. Another one of his paradoxical traits; he had an eidetic memory. Bagby finished his sandwich and his beer.

Picciotto nodded. He had thought the same thing. Cleary was better at intelligence gathering than combat. The waitress came by and topped both of them off. His tea refilled, Bagby watched the water slowly turn a dark greenish-brown. Having been a scotch drinker, the colouring reminded him of Glenlivet, and his mouth developed a tangy aftertaste at the thought. In the Dark Ages, he would have swung by the liquor store on the way back to base. It got to the point where the guy, with grey, streaked, curly black hair, who worked the register kept a pint ready in the brown paper bag.

“What about Shrike?” Picciotto said.

“Now, you’re talking.” He didn’t recite Shrike’s performance reports. He didn’t need to; both were familiar with how well Shrike was progressing. Picciotto had already earmarked him for the Mercury Initiative, based on Telford’s say so, but he still wanted to run it by Bagby just in case. Most likely, he would be matched with Rome since she usually vetted the new people.

“Hickory?” Bagby started to laugh reiterating how truly clever he thought the pun; especially since he was the one who came up with the nickname.

Rome had worked under the cover of a shell company for the last few years. It was more for tax purposes than anything else, but it allowed her to access all of the information she needed and provide for plausible deniability in case she had to prove her work had been done outside of an official capacity. One of her phone lines rang. She glanced at it and hit pause on her second of four computer monitors. She had been watching “The Imitation Game.” It was a scene in which Joan Clarke was allowed to participate in a test to discover capable code breakers. After finishing the test in record time, Clarke was selected to be part of Alan Turing’s code-breaking team. While the film played fast and loose with the facts of history, it was nice to see Joan Clarke portrayed in a favourable light. The answering machine picked up, and Rome pressed play. When the scene ended she muted the sound, played the recording, and listened to the message. The person had been asking about the hours for the dry cleaner, which had been code for wanting to have someone eliminated. Rome went to her bathroom and opened the medicine cabinet. She scanned the bottles until she found the one for vitamin D. She rarely went outside during the day, and at her last physical her doctor had recommended beginning a regimen which would include 2000 IU of Vitamin D supplements for three months. An alert bell rang on one of her monitors. She returned from the bathroom, read it, and clicked on the microphone on her headset.

Errol Dockery lingered by the vending machine in the hallway alcove and took another sip from his Coke. He wet the ends of his pinky and forefinger and rubbed them over his eyebrows. It had been a relaxation technique he’d picked up somewhere, and though he’d been sceptical at first, he discovered it actually worked. He took another sip of Coke and noticed while the soda machine hummed, the snack machine was silent. He had debated getting a Butterfinger, but in the end, decided just to stick with the soda. He was decked out in a t-shirt and jeans; he looked like a garden variety tenant for this particular motel chain. He and his team had been given Shrike’s most recent location, which had led them to room one-eighteen. Some might have said they were biting off more than they could chew with this one, but success would put Dockery’s name in the history books. His crew, now spread out, Errol did a final check. Each of them responded with an affirmative. They just needed confirmation. Errol finished his soda and threw the can in the trash. He popped his head out of the alcove. The hallway was clear, and he had a direct view of Shrike’s door. He brought his wrist mic to his mouth.

Owen Shrike had gotten a room on the ground floor around the back. Figuring a quick nap, and some meditation, he might not even stay the night. He’d been driving all day, though, and he needed a break. The room smelled of mildew. He sat on the bed and turned on the television. He never understood why the remote control had been bolted down to the nightstand but didn’t dwell on the idea. After flipping through channels for a minute, Rome’s voice came alive in his earpiece.

“You’re about to have some company,” she said.

Shrike was already up, heading out the door, and into the hallway.

“Oh,” she began and scrolled through the records of a database of which she’d gained access.

“I’ve got an email here; someone ratted you out.”

Shrike continued down the hallway on his way to the vending machine. It made sense to put someone there since it had a direct line of sight to Shrike’s room. He rounded the corner and immediately deflected an aggressive opening attack from Dockery himself. Shrike delivered a two punch combination meant as misdirection, and while keeping Dockery busy, he executed a Kotegaeshi wrist lock which put Dockery on his back. Dockery looked like a turtle that had been flipped over and was unable to right itself.

“How goes it, Hickory?” Shrike said and placed his right foot on Dockery’s chest.

Dockery’s face had a look of pure rage; Shrike knew it was a combination of being bested, but he also loathed that nickname.

“There should be two more,” Rome’s voice came alive again in Shrike’s ear. By now, she had probably tapped into the motel’s video surveillance system and could control the electronics.

“Roger that,” Shrike said. Beneath his foot, Dockery stirred.

“Is that Rome?” Dockery said.

“Yeah,” Shrike said. He looked over to the vending machines.

“You want something, Errol?” he added.

“Rome,” Shrike began, “would you be so kind as to get our friend here a Butterfinger?”

Rome did not reply, but both men heard the grinding noise the machine made as it dropped a Butterfinger into the tray below.

“You want to save me some time, and ask him where the others are?” Rome said.

“Now, what sort of fun would that be?” Shrike said.

He heard Rome audibly exhale followed by the sound of her typing.

“Fine, gimme one… OK, it looks like you’ve got one in the lobby, and one on the roof.”

“Was that so hard?” Shrike said, but he got no response.

“So, listen, for old times—“ Dockery started to say, but Shrike had fired two from his silenced Sig Sauer into Dockery’s sternum.

“Sorry,” Shrike said. He figured he’d head to the roof first. Maybe, he’d head east to Hong Kong after this. Rome wouldn’t have any trouble lining up some work.

Andrew Davie received an MFA in creative writing from Adelphi University. He taught English in Macau on a Fulbright Grant. In June of 2018, he survived a ruptured brain aneurysm and subarachnoid haemorrhage. His crime fiction novella Pavement was released in by All Due Respect Books. The follow-up Ouroboros is scheduled for December 2020 and his novella Dig Two Graves is scheduled to be released by Close to the Bone in September 2020. His other work can be found in links on his website: asdavie.wordpress.com